Can You Have Enough Reviews For Your Practice?

Welcome, welcome, welcome everybody to Top Line Live at Five! My name is Brian Devine here with Top Line. Today, we are going to be talking about what if there is such a thing as enough reviews or even too many reviews.

The reason that I bring this up is I’ve worked with clients that had really done a great job of bringing in a lot of great reviews. They did it over a relatively short period of time. So, you could tell that they realized that they needed the reviews. They did a big push in the off, in the practice. Then, started to get those reviews. Everything was working. Then, it sort of stopped. Because, I thought “Okay, well we have 10, 15, 20, sometimes 30 plus reviews, which is amazing.” However, the research is really clear on this that having a lot of reviews that are old is not nearly as good as having consistent reviews that are new. That’s why you need to have a system in place that doesn’t wear out your staff. So, even though it might seem like a good idea to do that big push, where you get tons and tons of activity. All those reviews right off the bat. If you don’t have a plan in place to get reviews consistently, eventually, you’re not going to be doing as well as you could be. 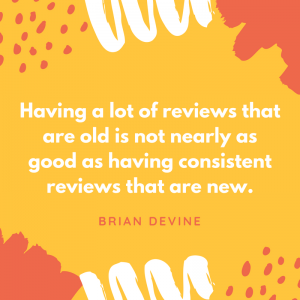 Your competition if they are, let’s say, they only have 15 reviews and you’ve got 50. They might overtake you in all kinds of significant ways. Simply, because they are relevant and new. That is what I want to make sure that you are thinking about when you are looking at having a reputation system in your practice. If you are really good at consistently asking for the reviews, then, please just keep doing that. Don’t wear it out it. Maybe every time you have a morning huddle, we tell you talk about it again. Talk about how you’re going to get reviews and who’s going to do what. That can go a long way.

What we have found is when we can take as much off the plate of your staff, then, we have better results. That’s why we’ve set up a system where if your staff can consistently say, when somebody is coming into the practice, if you could say, “Would you mind logging in please?” Or “Would you mind signing in please?” If they can do that we can get you all the reviews that you need. Then, we can do all kinds of fun great stuff with it as far as posting it on your website, on social media, creating videos, all kinds of great stuff.

If you are in a practice where you already have an electronic sign-in and you don’t want to ask people to double up, that’s totally fine. Because, there’s two options : #1 is that you can train your staff to say “Would you mind signing out please?” As obviously going be our system where we now take over and we start sending out the text messages, emails and all of that great stuff.

The final way is you can kind of put our system right on a phone, on a laptop, a desktop. Then, just put in the patient’s name, email, phone number and say, “Would you mind giving us some feedback on how your visit today?” That’s it. Then, you put clicks in “Yes. Okay” Then, we take over from there again.

The concept is we know that you need reviews. We know that you need relevant and up-to-date reviews. Meaning, you don’t want to have reviews that are getting older and older and older without new reviews coming in. Because, that actually can start to hurt you. So, we want you to have easy simple ways to get reviews on a regular consistent basis which is why we found a way to create this. So. that you have to do almost nothing and as long as you have a huddle once in a while, where you say, “Hey, is everyone still asking people to sign in, asking people to sign out or are you filling up that quick form when you want to get feedback?” As long as that’s still happening you’re in good shape.

Now, the cool thing too is that our software gives you the ability to log in. So, that you can see that people are actually being asked that they are filling out the form and you can see who has done what. So, you can say have they recommended you, have they left your review. All of that information is readily available.

So, if things start to slow down, you’re not getting reviews you can go take a look and see what’s going on or we will actually do that for you. So, I just want you to be thinking about that. What is your system in place to ensure that you have consistent reviews coming in? Even if you’ve had like that big push and you’ve gotten great reviews. “Congratulations! That’s terrific!” Don’t stop, okay? You can never have too many reviews. There’s never enough is enough. It’s about consistently getting new reviews. So, that you stay relevant.

Alright. That’s what I want to cover today. Let me know what question you have. I look forward to talking with you next time on Top Line Live at Five. That’s it for me! Bye for now!

Is Your Practice Marketing Foundation Solid?
How Often Should You Post To Your Social Media Accounts: TopLine Live At 5