Are Your Practice Marketing ABC’s in Place?

Welcome, welcome, welcome everybody to Top Line Live at Five. My name is Brian and I am very happy to have you with us today for what I think is going to be a short video because I wanted to talk about the what we call ABC’s of practice marketing. The reason that I am doing a video on the ABC’s of practice marketing is because there are some basic sort of marketing 101 concepts that we all know work and then once you have these basic concepts in place, then you can start playing around with different ideas and strategies and tactics to get to just locked in couldn’t work better campaign.

I have run into on more than one occasion now and very recently a huge company that was not doing basic marketing 101 that led me to decide…let’s just create a quick video here to talk about what that is. So, that if you are working with a company that had this big name and they’re charging a lot of money, you want to make sure that they know these basic things. Now, we’re not talking about the textbook. Four piece of marketing and all that stuff that I learned in college and all the fancy terms. No. 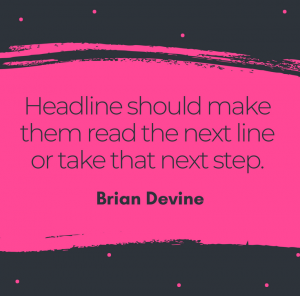 We are talking about the things that we know work that you have to have in place in order to get any real success. What has happened is some of these big companies, they do beautiful artwork and your ads and campaigns and mailers and everything just looks gorgeous and it fails miserably. Gorgeous campaign does not equal effective campaign. Please keep that in mind and I’ve said this too be before. Hey, just whatever you do, don’t just go with the pretty because pretty doesn’t mean effective. In fact, more often than not a real pretty campaign will not perform nearly as well as an ugly campaign. That’s a topic for a different day because I want to make sure we cover the basics here.

That’s when you run any type of a marketing campaign, you have to have a head line and that is the big first thing that people see. Yes, images will get attention but believe it or not, ugly images will get more attention than beautiful images. So, that means that you don’t have to have gorgeous images. Now, each individual location, each area, each type of practice, you’re going to want to play around and see what types of images your market is going to respond to best. But, it doesn’t mean that it has to be always the sort of super gorgeous thing.

Now, with your headline, that’s what gets people attention. That headline, the big thing that says, “Hey, look at me!” That is probably the most important part of all your marketing. Because, the headlines job is to get someone to stop and read it. Then, hopefully, if the headline is good enough, it’ll get them to either read the next line or take that next step. Now, the reason I say those are two different options because on Facebook, with an image something big and a big headline on it all, we’re really trying to do is to get you to stop to read the ad that we have in place and there’s going to be a headline underneath. There’s going to be some text above. So, it’s a little bit more complicated. But, if you’re doing a direct ad or you’re doing a landing page you want a big headline. That headline’s job is to get you to be the next line and that line’s job is to get you to read the next line and so on. Until you have done enough to get them to take the action that you want them to take.

So, that leads me to sort of the next step which is you’ve got to have an action that you want them to take. So, you can’t just assume they’re going to figure out what you want them to do which is to call your office or to fill out the form you have to have that that specific instruction of what you want them to do next. If you don’t have that, then, don’t run that campaign. The last thing that is so vital, that is going to be an offer that people care about. Again, this came from the huge corporation. I’ve seen this not just from one. I’ve seen this from several big companies that have forgotten these basic concepts. If you don’t have a good offer, it doesn’t matter how pretty your ad is. It will fail and that means that you have to take the time to go through and say, “Okay, what can we offer that people are interested in?” Then, test different offers. There’s not one right answer for every different industry, different locations, different target markets. All of these things play a role. So, take the time to pick an offer that works.

That means, that you can’t just use sort of the standard free exam. Those just don’t work as well as they used to. They used to work great and there are some markets, believe it or not, were people don’t even do that. So, if you do that it will work. But, you have to really know your market. That means that you’ve got to have a great what we call an “HSO”, a holy smokes offer. Something that gets me will go, “Wait, really? That’s great! What’s the catch?” You want them to ask what’s the catch. So, that you can tell them there’s no catch or tell them there is a catch. That you have to fill out the form before we run out and that works extremely well.

So, the reason that for the video today and for the blog post and I’m everywhere else where, you might be finding this. Today is to make sure that any marketing that you are paying for, that you are doing yourself has these basic ABC’s in place and that’s to have a great headline, test headlines and when you test them only test the headline. Don’t change anything else at the end, only the headline. Then, you want to make sure that you are testing your calls-to-action, telling people what it is that you want to do. Then, you test your offers. In fact, I would suggest, offer first. Another reason they don’t say that first of my list is because it’s usually headline, call-to-action, form – that’s kind of how we how we lay it out. But, that offer is huge, You can have everything done wrong but such a great compelling offer, that it still works. Then, when you have that and then you start adjusting everything else, you could have a great fabulous wonderful ad campaign.

Okay, that’s pretty much it what I wanted to cover today. Let me know what questions you have, how we can support you and I look forward to seeing you next time on Top Line Live at Five. That’s it for me! Bye for now!