Facebook Messenger Bots for your Practice – What are they and should you use them?

Hello, everybody! It’s Brian Devine here with Top Line and welcome to today’s Top Line Live at Five. So we’re going to jump right into something that’s pretty exciting. I’ve been learning more and more about and starting to test with it and that is Facebook messenger bots.

So I want you to start thinking about this because it’s a relatively new technology since the last year, so they’ve really perfected it and it is giving you an opportunity to stand out from the crowd and really give your practice an amazing boost if you do it right.

So, the question that I’ve been getting is around this Facebook bots, is it worth doing? The short answer is yes. Okay, the long answer is it depends on what your goals are and what you’re trying to accomplish and you’re probably going to hear that from me over and over again and I know it sounds of a cop out. It depends, but it really is important for you to know what the goal is, what we try to achieve and then make sure that your tactics go along with that. 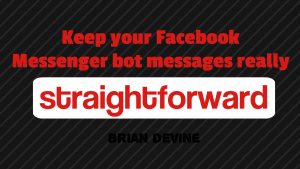 Because sometimes, the messenger bots really won’t make sense based on what you’re trying to achieve. Let’s get into kind of that long answer and what questions you need to answer in order to know that this is something that you should do it. One of the most valuable ways that I have come up with that, I can see that Facebook messenger bots can have a huge advantage is, if you’ve been thinking about, maybe doing a contest in your office and using it to drive new patients as opposed to just a fun contest for your current patients.

So what’s really cool about this is that once you start running these campaigns and you use a bot, essentially what happens is somebody will message you, right? They’ll send a Facebook message and you tell them what to say. You tell them, say, “What’s the the giveaway” Because the contest, it really can work truly well using the bots.

So, if you have, if you say “Hey, you know, say… text or message me, I’m in. Then, you’re going to have somebody that’s on Facebook. That that types in “I’m in” and then the bot takes over from there and if they don’t write “I’m in” the, bot won’t take over won’t start this process.

Well that means that if your competitors are looking at all the stuff, they’re very much less likely hate to type “I’m in” because when you’re on Facebook and you start to use the messenger app and you use this, these tools, then you get that person’s exact information because they are on Facebook and then Facebook, they’re giving their real email, their real phone number unless they’re real savvy and they log in to an alias or something then you’re getting a live new test so you’re going to have have less of your competitors and so they’re lucky loose filling out your form and messaging you.

Now what’s nice is the bot will then take over so if it’s a contest and you say you know type in “I’m in” Well then it will take over and send them message and then it will tell them what the contest is, how it works and what it’s all about and start asking questions and you can go as crazy as you want but you don’t want to go too nuts.

You just want to keep it really straight forward. Let them know what the offer is, what the contest is all about, what they have to do in order to win and this, because there’s, a technical side to this, you can connect this up to an autoresponder so you’ll have the exact right email, exact right name, the exact right phone number that can automatically be sent to an autoresponders and it can start sending out emails and text messages as well as the Facebook messenger and also have runs into itself.

Now, the other thing that’s nice is that at some point, based on what you put into that messenger bot, it might make sense for an actual live person to take over and you have already started a conversation. Someone on your team you’ll be able to look at Facebook take over that conversation and then hopefully bring them in.

There are so many ways that you can use a Facebook messenger bot that is actually exciting. And you know, my brain starts to go in ten different directions about how you can use all this so I really want to make sure that you’re thinking about it, think about what your goals are, what you’re trying to achieve and if you’ve ever thought “I want to run a contest to see if we can drive new patients into the practice, consider the Facebook messenger bot as a way to do that.

I also want to make sure you know that this is not sort of this thing where you just let it live post on Facebook and somebody comments on and says “I’m in.” It actually run ads that can go to a specific post on Facebook that tell them a little bit about the contest that says “I’m in for details” or you can run ads straight to the Messenger and in order for them to take advantage of it, they have to use Messenger.

Please give me some feedback. Let me know what thoughts you have, different ideas and ways that you figured might be valuable in the practice, what you can do with it and if you have questions about the technical side, how to make it all work, how you connected up to an autoresponder so you can send out follow-up emails and text messages and you know, reach out to people in all these different ways. Please do so. Let me know what questions you have and we’ll get back to everybody that can and I look forward to that feedback.

Thank you so much for your time today. That’s it for me. Bye for now.

Tips on how to best set up Facebook ads for your practice
Practice Website Security. Do you Need an SSL?