Now, I have been using Google AdWordS for years and it has always been a part of the marketing mix, just kind of depending on what goals and budgets and everything else that’s going on with a practice.

But usually, it becomes part of the mix somewhere along the way and we’ve always had known how to get a few few patients out of it and we could typically, we’ll use that as a secondary to your Facebook. Because, if we are able to find a really great winning campaign in Facebook it usually translates very well into Google AdWords and the reason that we go that direction is because it’s usually cheaper to test out the campaigns in Facebook since it’s real interruptive marketing.

Meaning, we are putting as in front of people who are not looking for you and trying to get them to them and say “Yeah, this sounds pretty good.” When we find that winning ad moving it over to Google AdWords where people are looking for you, it’s usually a really good opportunity an avenue and we can have lower cost per click.

When it comes to getting those ads running in Adwords, well, I’m here to tell you that I have spent the day working in Adwords for a few different accounts and testing a few things and wanting to find out what’s new, what’s changed so I decided I’m just going to get on the phone with Google and let’s let’s just get to it. What are all these changes and what are they about, and I was absolutely blown away. 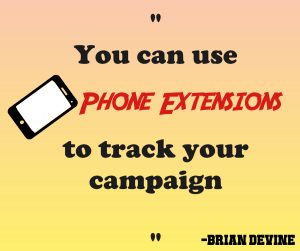 There is so much going on with Google AdWords that most people are not aware of and even looked at a whole bunch of ads to see if more people were doing these things and they are not. So there’s a huge opportunity right now in order to take advantage of everything going on with Google AdWords, so what am I talking about… I’m talking about extensions.

Now, I’ve heard about extensions years ago and I started using them especially the phone extension. It was a great opportunity to put a phone number right there in an ad especially on a phone where someone would just tap and call your office. So I’ve been using this for a while. Boy, have they come along!

So not only does it have the phone extension, which I highly recommend that you use if you’re not already but it’s very very straightforward to put in there. Well, what you can do now that is really slick is you can set that up to be tracked as a conversion when you’re setting up your ad campaign and you put that phone number in there. You can say “hey” when somebody actually does tap and call. That is a win for the ad campaign. I want that to be called a conversion. Meaning, it went from they saw the ad to they called the office and that’s about the best you’re going to do which is everything you’re trying to do with the campaign right. So that’s the first one.

The phone extensions, not a whole lot of change as far as how they work. They’re just, there’s that everyone should be using. We’ve been using them for a long time so I highly recommend that you do the same. Number , web page extensions. This wasn’t new again. This is something that we’ve used before. They’re getting easier to install. It used to be really complicated to try and get your your ad to show up and then links to your website and internal pages to your website show up.

You’ve probably seen them where you see the ad normally and then just one link that goes to the specific page that the ad is designed to send you to. Well, you can also include these extensions and show the About Us page, the Pricing Page, the Services Page, Maps, Directions. So you have control now where you could put a lot more than just one link and there’s no extra charge for this and it takes up a huge amount of relisting so take advantage of that.

Number three is the one that I am really excited about because it’s finally here. I’m sure it’s been here for a while. We’ve been playing around with ways to get it connected and how to make it work and it’s easier now that it’s ever been.So that’s why I’m really excited about it. What you can do now is set up what are called location extensions and all this really means is you have the opportunity now to get your ad to show up in the Google Map Listing so you know the coveted position in Google Maps, the 3-pack. We call it in our industry the snack pack. I don’t know why I called that but there’s three map listings when you’re searching for local things.

So dentistry, orthodontics, chiropractors you guys are it! So if somebody’s looking for you they’re going to get that little 3-pack and now if you’ve been struggling trying to get into that 3-pack which is not easy all the time, if you’ve been struggling, you can actually just pay to be there now and that it’s a huge shift where you can just say “You know what, I want my ad to show up in the Google map listing and I’m willing to pay to be there tomorrow.” That’s how fast they can work so yes, there’s technical sides and you have to do a little, you know a little dance here with steps and movements here and actually even Google is still kind of working out all the kinks because we did all the steps and I was on the phone with them and they said “Yeah, that’s not working so it’s not exactly perfect yet.

However, it’s not nearly as challenging as it used to be because I was very easily able to find the steps and then call them and say “Hey, I’ve done all this what’s going wrong” and now they’re working on it.  That is a really powerful thing. What we know is that when you have an ad in that Google map listing, percent of the people that see it don’t know that it’s an ad and they click on it just like they would any other listing at the top of the map search.

So you get to now be number one in the map. Tomorrow, if you’re willing to pay for it instead of struggle for it with everybody else so there are  of you all trying to be within that little 3-pack. Now you can just say “You know what, I’m going pay to be there tomorrow,” and as long as you’ve got a good offer you’re going to get people clicking on your ad.

Now, there’s a whole lot more that we need to talk about because if you’re willing to spend time, effort and money to get people to click on your ad especially if it’s there in the map, then you really want to make sure you’re sending them to a fantastic landing page that just gives them one option. “Do this to get that.” Don’t set them to your home page. If you center to your home page, you’re going to have a terrible conversion.

Meaning, the number of people who click on your ad who then call your office to schedule an appointment, or fill out a form on your website to schedule an appointment, it’s going to drop significantly. Because, there’s a disconnect between whatever your offer was and finding your homepage which probably doesn’t have the offer so make sure that when you are willing to spend that money to get into that map, that you send to a page that is very clearly an exact match from your offer to what it is that they’re now going to get when they’ve been on that page and then make it super easy. “Do this to get that.”

360 Degree Video for your Practice: What is it and why do you want it
How to build gamification into your practice marketing