Voice Search And How It Effects Your Practice Marketing

Welcome, welcome, welcome everybody to Top Line Live at Five. My name is Brian here with Top Line. And today, we’re going to be talking about something that’s a little bit different and that is voice search. The reason that we need to be talking about this is, because more and more people today are using their phones to do all of their internet searches. And as this shift continues, then we need to think about how we try to position your practice in front of those searches. Now, when we first started playing around with, with search engine optimization, otherwise known as SEO, then we would actually think about sort of the long questions that people might type in and how can we get your site or your page to show up when somebody does those searches. And over the years people have been shortening those searches to the point where we’ll do like two word keywords to get you to rank for those because that’s what people were doing.

They would just type in your specialty and location. And that’s it. And tho 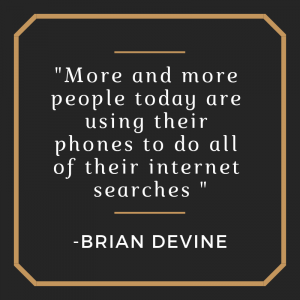 se are really easy to rank for actually, when we first started and then they got harder and harder because more and more people started to catch on and realize, people are just typing into words and we’re going to all fight over getting those two words and having our website show up when somebody searches there. Now, what’s changed is people are now just grabbing their phones and they’re saying, find the dentists near me, find the orthodontist new, may find a chiropractor near me and it’s a longer question. The other thing that’s changing is people will be in the middle of the conversation, will be a back and forth and then go.They’ll pull out their phone, tap a little button, and then asked the question in their phone.

That means that we now have a real opportunity to start doing search engine optimization SEO for these long questions. And now we used to do all kinds of stuff around what we called the frequently asked questions and you’ve probably seen those before. We would do videos, all kinds of stuff to get in front of that. So, somebody was searching what we would consider a frequently asked question for your industry, and then we could get a video to show up, which would be even better than just your website. Because we’re now, you’re now seeing the person they’re feeling that they’re getting to know you. There’s some engagement and that worked extremely well. They went took it a step further and we would do what we called, they should be asking questions. Those questions that we wish patients would ask will, they probably don’t, but when they do, you become the obvious choice and we would sort of what we call seed that market with your questions that you think everyone should be asking because you’re the only ones in the answer it, right?

Well, we’re actually shifting back to that process just a little bit differently because instead of just saying, well here are frequently asked questions. We get in the office here, the questions that we hope and that we wish more people would ask. We’re now shifting to what are people saying in their phones? What does, what are the questions that people are asking? Because Google is looking for pages that have the answers to their questions now, it doesn’t mean that you can just put up a page on your website and say, “Here are all the common questions that people might ask and you know, put a little blurb about the answer.” It’s not quite that simple, but it’s actually not that much far off from what we do. Actually we’ll need to do and so I wanted to cover that today and make sure that you’re thinking about this because this is the big shift that we are going back around to the old way that we did things.

We started with sort of those long questions, the long set of keywords that we thought people were going to be searching to find you and those long sets starting to get smaller and smaller until it was just maybe two words, your specialty in your location. That would be about it and now we’re going to be exact opposite way because people aren’t typing it in, which means that they would want to short. They’re actually just speaking and they are using just natural questions in Google has gotten smart enough to know if you have a website that is answering a lot of these types of questions and you have something very similar that you have really optimized for, your answer is going to show up for a lot of versions of that question.