Do You Have Your Practice Marketing Calendar?

Today, we’re going to be talking about something that I absolutely couldn’t believe in more and it is so hard for all of us as business owners to stick with and it is incredibly important but I decided that I needed to get it out and really talk to you about this today and that is to have a marketing calendar or an offer calendar that means that every single month of the year you know exactly what you’re going to be marketing what you’re going to be offering and then it’s all laid out now you don’t have to do the entire year all at once.

I want to make sure that you know that you don’t have to do every single month of the year all at once but you should do at least three months at a time and so that means that you’re never in the month like we’re in March now you’re never in March going gosh what are we going to be offering but you’re in March saying okay we’ve got April pretty well locked in let’s think about what’s gonna happen in May and then come April you know that Mays locked in you’re gonna be talking about June. 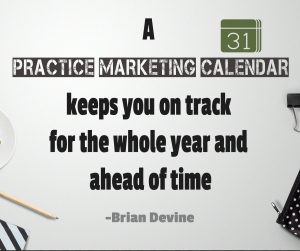 Now, that doesn’t mean it’s all written in stone. You can’t change your mind. It just takes a lot of that pressure off when we run these different campaigns, whether it is online using digital, whether we are running postcards or whatever it is that we might be running for a client. If we are up against a deadline and we’ve got two or three days to get something done, it’s never quite as solid as it can be. If we’ve got several weeks and we already know what’s going to be coming up, we can get it all lined up.

Get all the approvals and then you’re off to the races. All you need is checking the box saying “Yes, that one’s good. Yes, I like that one. Make a couple of changes on here and then we’re off.” You can actually just decide we’re going to run this offer for the next three months and then maybe we’re going to add an offer here and there.

One of the things that we’d love to do is set up a birthday campaign and I got to tell you, I took this from the restaurant industry. I saw it happening and actually we’re looking at doing it for restaurants just because we’ve gotten so good at it that when you see something working in one industry and it’s not really being done in another, that doesn’t mean that it can’t be done. It just means that no one’s done it yet, haven’t thought of it.

We took that concept from the restaurants, who, I mean. obviously running a birthday campaign for a restaurant. You’re crazy not to do it and it is a huge wonderful way for them to build their list to get people to come in on a regular basis. If they have a slow night, they can run these these campaigns to a specific person that has already raised their hand and said “Yes, I like your restaurant.” There’s all kinds of reasons it translates beautifully in dental, orthodontic, chiropractor, medical in general. You’d be surprised, any opportunity that you have to say to somebody “We want to make you feel special.” You should do it now.

The reason I bring up the birthday campaign isn’t just to say that we’re good at it. It’s because I want you to realize that you can run a campaign that is designed to just go and it’s going to go for the year and then maybe make a couple adjustments along the way just based on the result you’re getting. But you know that this campaign is going to run for your full 12 months or just indefinitely and then each month or every other month, you’re going to be changing a little bit. What kind of office you’re going to put out there, what type of marketing you want to test and run. It really is a great way of keeping things working constantly while you get to play with new ideas. So, I really want to make sure that that’s clear and I’m just going to show you because this is the reason.

I thought of this today because I was just making some adjustments because I did say that obviously, you want to make adjustments but I use click files for most of our campaigns. We’re actually testing some really amazing software right now, so very excited about it but click funnels is just a mainstay and you’ll see that I’ve got you know, the January opt-in. I’ve got the January Order Page then the Thank You Page and they’re already built. I’ve got February, March, April, May. So May’s done and June. So I’ve got everything lined up, all ready to go. So there’s never any question about what’s going to be happening on a particular day so here we have it. We even know in November.

Now, this can change but right now we know that in November we’ve got something ready to go. So if you’re thinking about doing newsletters and we have a newsletter option and so just kind of take a peek at that but essentially, we know that. Hey, this is Thanksgiving so let’s put turkey out there and let’s use colors that are comfortable for Thanksgiving. Do some kind of crazy special, offer a huge discount and see if we can get people excited, right?

You know, around the holidays and that’s kind of the concept here. If you think through your next at least three or four months, then you could really put the time in that’s necessary. Then, you’re never just trying to spin your wheels and get things done really fast when instead, you can have your whole year just laid out or at least your next quarter just laid out and ready to roll. If you have any questions please ask away. Leave us comments, shoot us a message. Give us a call at 720-989-1932.

Would You Like Massive Exposure For Your Practice Without Paying a Fortune?
Did you know you can send personalized videos to your patients in one click?