Want Proof That Facebook Can Bring You New Patients?

Welcome, welcome, welcome everybody to Top Live at Five! My name is Brian Devine and I’m really excited to have you here to talk about what is happening right now when we’re running these Facebook campaigns.

Hopefully, you’ve seen it in kind of what I put out on this particular video in the captions. There is I’ve been talking to a lot of prospective new clients in the last few days. In fact, it’s been really fun because it’s people all over the country and that’s been really exciting to get different perspectives. The question that has come up on several occasions, so, you know, if you’re watching this and you know if we talked recently, it wasn’t just we’ve had lots of people. Just in the last few days, they ask the same question which is, “Can Facebook really provide new patience?” Come on and we’ve had a few people that said, you know, we’ve done Facebook. It doesn’t work. Let’s talk about other things and I’m going to tell you as much as we can do all these other things, when I’m talking to somebody that really needs results today, now, fast. That, we need to start getting new pages through the door right away, we just can’t be Facebook right now. 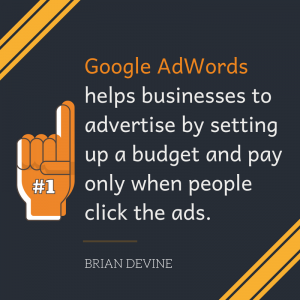 Now, yes can adwords work? Absolutely! We do pretty well with adwords. Adwords is a much, what’s the right word? A more experienced platform. If that makes any sense. Essentially, with AdWords you have lots of people using it. Lots of people that understand how to take advantage of it. That means that the costs for adWords are going higher and higher because people are using it and you have a lot of competition.

So, what’s happening is that the keywords that you’re trying to get for Adwords get more expensive per click. So, when somebody clicks on your ad, you pay for that and that cost is going up higher and higher as more and more people are competing over the same keywords in a specific area.

There are some things that we’re doing right now with Adwords that make it really unique. That most people aren’t even aware exists and we can so we can get good results. It just it’s not quite as fun and exciting as Facebook. It’s all because of the targeting. I’m going to keep this video short today because I am just blown away by some of the results that we’ve gotten for a relatively new client.

I’m going to switch over here at my video and I’m trying to, I didn’t get permission. So, please don’t get me in trouble. But, this is just amazing. These results. This is statistics directly from a client’s account with us. You’ll see here it says the birthday opt-in. So, this is the birthday campaign and you’ve heard me talk about the birthday campaign before. Hopefully, you have. If not, let me know and we’ll talk about it. Yeah but a 12% opt-in rate in the last 30 days and that might not sound like a lot but in the world of online marketing that is outstanding. Whenever, we can get a 5% or better we’re pretty happy but a 12%, when we’re in those in that level, it’s just really excited because, here’s the thing, that I want to make sure we talk about is that we are spending less than $10 per day on these ads. In fact, we only just increased it to around $12 a day. We’ve been running this at, we started at 7 then moved to 8 and now we’ve moved up a little bit further because it is working so incredibly well.

We’re consistently getting these numbers that means that in the last 30 days this office has had 20 opportunities to bring in a new patient. Now, this is only the people that filled out the form. This does not even include the phone calls because we actually use a tracking system. So, that when somebody calls the office, it’s recorded and you can listen to it back. You can make sure that all the questions are being answered the way that you want to. Those numbers are actually almost as high.

The reason I’m not showing you the host is because we don’t know which ones filled out the form and called so I’m not going to try to that. Somehow, there are 40 new patient opportunities here in the last 30 days because that’s not the case. Probably, some in the range of 20, or maybe 25 and Now, we’re again talking about less than then $300 in ad spend to get this to happen and it gets even better.

We just started to roll this new campaign out and this is an implant special. Again, I’m covering it up as I don’t want nobody to see exactly who this is and start bugging but we just rolled this out in the last few days and we’re at a 9% opt-in rate. Meaning, those are the people that clicked on the ad, came to the landing page and raised their hand and said, “Yeah. I want that.” Nine percent. I am absolutely thrilled with that.

We’re actually are running a split test. So, there’s a second campaign and that one’s running at about five, maybe six percent. Again, we’re spending about seven, maybe eight dollars per day on these campaigns. So, implants rather than spending tens of thousands of dollars to drive people in. We’re spending a few one, a few bucks here and there. So, that’s why I want to show it to you.

Now, why is this so powerful? Why is this working so well? This particular office has really taken full advantage of the training that we offer and that is part of our onboarding process and showing you how to turn these potential new patients into lifetime patients so they raise their hands say, “I want what you’ve got there.” It’s a process. A step-by-step process that we want to help you go through so that you can turn these people, not just into coming in for their their special whitening for their birthday or for some kind of special for implants. We want them to be your patients for life because that’s where the real value is.

So, we’ve put this all together to help you do just that. So, we have a leave follow-up process. We have the frequently asked questions for for the leads. So that, you know, that these are the questions that are typically going to come up. Then, for your staff for the team members that are to be talking these people, we want you to have the information for them as well.

Alright! So, I think that’s enough on this today. Obviously, I’m excited about it and having so many people to talk to about it just in the last few days. It’s really fun and I want, I really want you to call me out if you’re like, I still don’t believe it. Give me a call. Let’s talk about it. Let’s run some tests. Let’s show you what’s possible and if it works for you, then, hey, you know, you’ll be glad that you reached out and if it doesn’t, we’ll find a way to make something work for you. So, that you won’t have anything to risk at all and that’s kind of the way that we do things.

That’s it for me! I hope you enjoyed today’s episode. That you hopefully learned a little something. Hopefully, some of those stats are exciting for you to see because they should are for me. We love it when that happens and when it happens over and over again, it’s really exciting for us as a company. Alright! That’s it for me! Let me know what questions you have, how we can support you and I look forward to seeing you next time on Top Line Live at Five! Bye for now!

What Makes One Dental or Orthodontic Practice More Successful Than The Other?
Do You Have A Monthly Newsletter? Is It Designed To Drive Revenue For Your Practice?